Gyula Kovacs I, the undersigned, (born in Hungary, Kozármisleny, 1941. 04, 16 women: Elizabeth Clement Hungarian citizen identification mark 0809th 1149410416) with the questions to the Honourable Court that the "Hungarian State v. Lakásmaffia" twenty years ago long and has so far not concluded proceedings below, please put forward their request to meet us and take a fair sentence?
Therefore, I intend to perform alábbikat the "Joinder Lakásmaffia v. State of Hungary" in twenty years of ongoing litigation on behalf of the applicants deprived of their property while appealing to the action of Mr Hague International Court of Justice:

The feeling of "Hungarian Government and Parliament" hatalombirtoklók denominator in the last twenty years Hungary was stripped and sunk colonial fate.

IEzért happened and are still being done in the exercise of power to disregard the rights of Hungarian citizens, property, property theft and diversion, and therefore acts against the people and the laws in force in disregard of the order are exercised, the judicial and executive of a criminal offense against a series of jogtiprás feljelentéssel edges Welcome to the Hague International Court of Justice of Hungary and the courts against the Hungarian State

The Republic of Hungary as the "provisional constitutional" law into contempt, the law of non-compliance, a manual worker families are deprived from home, tulajdonjoguktól in such a way that power a good salary in Hungary purchased the claim of executive power of state actors in order to deprive the citizens to provide a hand for the respective power.

This turned out there to us, namely the members of Joinder with impunity Lakásmaffia megfoszthattak tulajdonainktól.

. The released before the nation, opened the way, the return to constitutional order, but Hungary is not what happened!

The oligarchy, which since 1945 has acquired power in 1989, is to legalize themselves.

The current system, while condemning in the old system, but it serves the deeds.

We not only, that is, members of the Joinder, but the whole of India in the last historical period határmezsgyéjére been in existence.

As there is only a temporary constitutional law, it has been illegally deprived of the means tulajdonunktól, recruited and well paid judiciary segédletével.
Litigation of the Hungarian State with twenty years is not completed, because our laws do not affect the country over the power and practitioners, as the exercise of power in themselves to all be above the law are held.

Even a temporary "Hungarian Constitution also ensures the right to property, which is not time-barred.

The Rome Convention states, Hungary has signed, and the 1992nd 5 November ratified the European foundations of freedom in 1950, done at Rome Convention, whose official name is.

This convention ensures that the protected rights of citizens to enjoy, have recourse to.

So on the one hand, the main examination of the administration of justice should be done at home, but if they do not go smoothly, there is another built-in provides a guarantee for the citizen.

That 13 of the Convention Article, which states that the Convention rights have been violated his right to have the domestic authorities, the impairment of an effective remedy in that case, ask if the rights are violated by persons acting in an official capacity.

So there is the 1993 Act XXXI. Act. A Hungarian law, which is based on the home court is not only right but a duty to investigate citizens' complaints, in violation of the Convention. This is usual practice in European jogállamokban

Since India is concerned, these judges do not consider themselves above regulations, so their actions comply with, not to be.
Until 1990 we lived in deprivation and jogtiprások without democracy.
1990th March 08-W launched a series of illegalities, since laws are not enforced in many cases, there is no right of the people!
The above is not published, but this country, everybody knows that.

I ask as the "Hungarian State v. Lakásmaffia Joinder" applicant, a company representing the person of the Hague International Court of Justice to do its utmost to that of the Hungarian State:

1st The rights of the citizens tiprását feet, ignored the relevant laws, the laws in disregard of law and the exercise of the rights to stop it!
2nd I also ask for Mr Hague International Court of Justice to order the Hungarian government deprived of compensation or the return of unlawfully seized own property.

The lawsuits are ongoing for twenty years, the Hungarian courts!

We, the members of Joinder Lakásmaffia so far visited more than one firm of lawyers to perform legal representation, but the legal representatives of our cause does not undertake, nor even the lawyers who were appointed by the court to protect the supply of probation. Whichever side of the applicants' lawyer, but standing up for their interests represented, they will, legal rights, in the twenty years since Peru during the trial, and unlawful acts against a multitude of court rulings to the Court. Such védőügyvédtől the judge and lawyers to withdraw without legal representation, negotiated without any notification to the applicant's submissions and, of course, refuses, so far as any judge hearing our case, in all cases and has consistently done so.

In summary, the legal representatives will not assume the case on the grounds that they will no longer be praktizálniuk in court.

Here I call on Mr Hague International Court of Justice to dismiss the power of bíráinkat respectively, of the rights and compliance with the law!

Shall immediately pay the compensation deprived the Hungarian State would withdraw its staff and judges, given that tulajdonunkból evicted from the street, they put us unduly, unjustly, to the jogainktól fosztással, segédletével detachment forces, abusing the judicial power, the use of violence carried out their will on us.

In our country, the elections take place every four years, governments come and go, but the present rule of law practitioners visszaélésükkel Hungarian courts, judges of this injustice is exercised over the people. None of the governments seek to restore the rule of law and the Constitution helyretételére.

We are not lawyers, not judges, to assert our work provided a small home, which makes illegally stripped, lifestyles annulálták, ellehetetlenítették. Did not belong, and we were not indebted to anyone.


Jobbrafordulása our destiny in order to have any legal options we went along, but the result of judicial mafia mókuskerekéből attempts have not been in twenty years, the court did not conclude the affairs, not to mistake the place, abusing

the power of terrorizing the applicants. Fogyva jogainktól rapidly and in many cases deprived of living the middle of Europe.

Hungary's international legal norms that citizens also have the right to say in the management of their own destiny, which is the illegitimate "Constitution" does not offer!

We respectfully ask, as Lakásmaffia Joinder of members of the International Court of Justice to rule that the courts of the Republic of Hungary in terms of non-compliance with the law, and not respected.

Therefore, please, please, Dear International Court of Justice, say the nation's right to self-determination, to live with. At the same time here, please order the responsible, megfosztóinkat immediate kártalanításunkra a Ft 100 million, the order can be made per member and above the daily interest is taken into account.

Our case, the Hungarian Justice judges committed the following violations:

The Hungarian State agencies operating under the provisions of constitutional law, procedural deficiencies resulting from the deliberate szabályszegéssel infringed, violated, and ensured a full property right. The Hungarian Government has not provided any protection to, or integrity, with serious material and moral damage caused to the applicants, in violation and disregard of our rights is the moral,

with 1993. XXXI. Constitutional rights under the Law of the personality and the completion of an important means of protection, and thus classify the so-called privacy rights are, strictly worthy of protection lasts. "

This agreement is a basic rights of citizens of Hungarian, which is a normal society, it is obvious to everyone. Alapvetőként determines the life, liberty, security, fair trial, of assembly, of thought and religion, the association, the right to ownership. Prohibits discrimination, the abuse of rights.

The Civil Code. § 75 (1) provides that the rights of moral obligation to respect everyone, and as individual rights, protected by law.

(3) the person would otherwise restrict the rights attached to the contract, or unilateral declaration null and void.

By law, he who violate the moral law, to request the termination of an infringement and a claim for damages may arise. Civil Code. § 84 (1) that.

Civil Code § 339 (1) According to anyone who unlawfully causes damage, is obliged to compensate.

Fault, that is, the damage had not behaved as the situation might have been expected.

§ 115 (1) (3) § that the property is not subject to a limitation, highlighting the importance of (3), require the owner of unlawful interference, the return of property wrongfully taken.

The fact that our fundamental rights as the right to property, the office szabályszegéssel intentionally not provided. - (P01) procedure under the table - the hard way or experience detriment and the discriminatory way it handled. Property, possession of a foreign company owns, the property received, egzisztenciánkat annullálták of abusing their power. Taken together, violated any provision of the Civil Code, whether or Csjt. provisions thereof also.

The general provision in the Constitution set out in § 8 (1), § 13 (1), (2) the fact that our fundamental rights as the right to property, the office has not provided intentionally szabályszegéssel globally, in violation of all provisions or the Civil Code or Csjt. Of the provisions.

In sum, those decisions are still in the period elapsed since the dispute calvary. All of these courts during the period were ignored and violated the Civil Code. § 187 (1), (2) The provisions of paragraphs, or illegal activity, and failure to act on behalf of the courts.

Please Welcome to the Hague International Court of Justice to order the judge helyretételét errors, as the Code of Civil Procedure. Under § 342, misuse of power by the Court. The Civil Code. 5 § 1), the Act prohibits the abuse of rights.

The Constitution set out the general provision states:

§ 8 (1) of the Republic of Hungary recognizes the man, the citizen is inviolable and inalienable fundamental rights are respected and to protect the State's primary obligation.

§ 13 (1) of the Republic of Hungary guarantees the right to own property,
(2) It is only in exceptional cases and monopolize the public interest and statutory cases.

In view of the owner to enjoy the right to use the right of possession, right of disposition, relying on § 115 (1) (3) § that the property
not time-barred, highlighting the importance of (3) that the owners claim the law and rights by shareholders of unlawful interference, and the restoration of rights, which as of today objected to the procedures described in the attached table are rejected Denied

The Civil Code. According to § 349, Public powers for damage caused to the liability can be established only if the loss of normal right of appeal was not removed. The Civil Code. Minister explained that the state administrative

The Constitution set out a general provision that:
§ 8 (1) a citizen of the Republic of Hungary recognizes the inviolable and

Inalienable fundamental rights are respected and to protect the State's responsibility, is a primary obligation,

currently, over several decades refused and was dismissed today, ending this today.
As noted above, we ask the Honourable the Hague International Court of Justice, the Hungarian State to pay to restore our rights, to the subsequent remedy, and the harm they have caused legitimate compensation, a twenty-year retrospective effect!

Please Welcome to the International Court of Justice, say, a Hungarian citizen has the right to a fair and laws of the State based on law and justice, civil rights guaranteed by law!

Lakásmaffia Joinder as a member of: 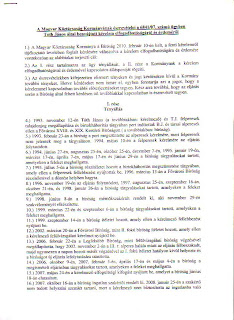 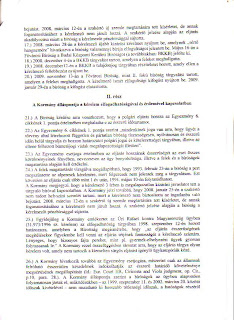 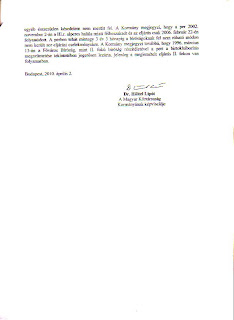 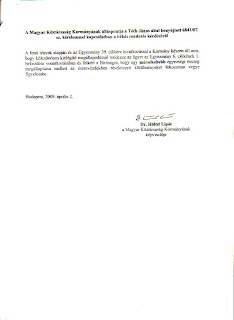